Slide 1
PURITY UVC:
The Purest and Healthiest Pool Water You Can Get!
This is the ONLY Residential Pool UV system PROVEN to sanitize and disinfect beyond U.S. Drinking Water standards!
Slide 2
Only PURITY UVC Gives You A Truly Safe And Clean Swimming Experience.
Twice as clean as drinking water, without the harmful side effects from chlorine, salt or ozone.
Slide 3
UNSURPASSED DISINFECTION.
The Purity UVC is the ONLY disinfecting and sanitizing system in the world that purifies swimming pool water to drinking water standards and beyond.
Slide 4
MEDICAL GRADE TECHNOLOGY
The superior design of Purity UVC produces DRAMATICALLY better “kill rates,” in less time, using less energy.
Slide 5
Twice As Clean As Drinking Water
With less maintenance, no side effects, and a lower cost of ownership than any other system.
Slide 6
The Purity UVC System
Up to 400 times cleaner than competing UV and Ozone systems.

Purity UVC Is Designed to Provide the Purest and Healthiest Pool Water You Can Get.

The Purity UVC system disinfects and sanitizes to “twice as clean as drinking water,” while reducing your chlorine levels and chlorine usage by up to 90%.

No other residential UV system achieves the results of the Purity UVC system, because our system is designed, engineered and constructed to produce medical-grade results consistently, every time.

Here's how we do it: 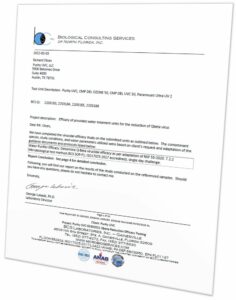 To prove the superiority of the Purity UVC system, we purchased several of the most popular residential pool UV systems currently available in the US, and shipped them to a nationally-certified, independent 3rd party testing facility (BCS Labs in Gainesville FL), along with a Purity UVC system, for independent comparison tests.

By contrast, for every one pathogen that got past the Purity system, there were as many as 404 pathogens left behind by the other systems. Check out the results in the table below.

Here’s how the Purity UVC system beats the others:

Here’s Why Ultraviolet Light Is The Overwhelmingly Superior Choice For Water Disinfection...

Ultraviolet light has been recognized for decades as a superior disinfection and sanitation technology compared to chlorine, bromine, and other traditional approaches.

That’s because the wavelength of ultraviolet light (specifically the “C” band, also known as UVC) is the perfect size to penetrate the DNA of any microorganism, thus allowing it to literally destroy the organism from the inside out.

The big problem with most pathogens is that they replicate so quickly, they can become dangerous and deadly in a very short period of time. (AKA the term “going viral.”)

However, when the DNA is destroyed, the pathogen cannot replicate. Thus, within a matter of hours, the pathogen threat is wiped out, and the water (or whatever material is being treated with UV light) is now safe for humans.

Here are some additional facts regarding the use of ultraviolet light for disinfection:

When you use ultraviolet light as your primary disinfection system, you can dramatically reduce your usage of chlorine, ozone, bromine, or any other disinfectant, because the UV system does all the heavy work. 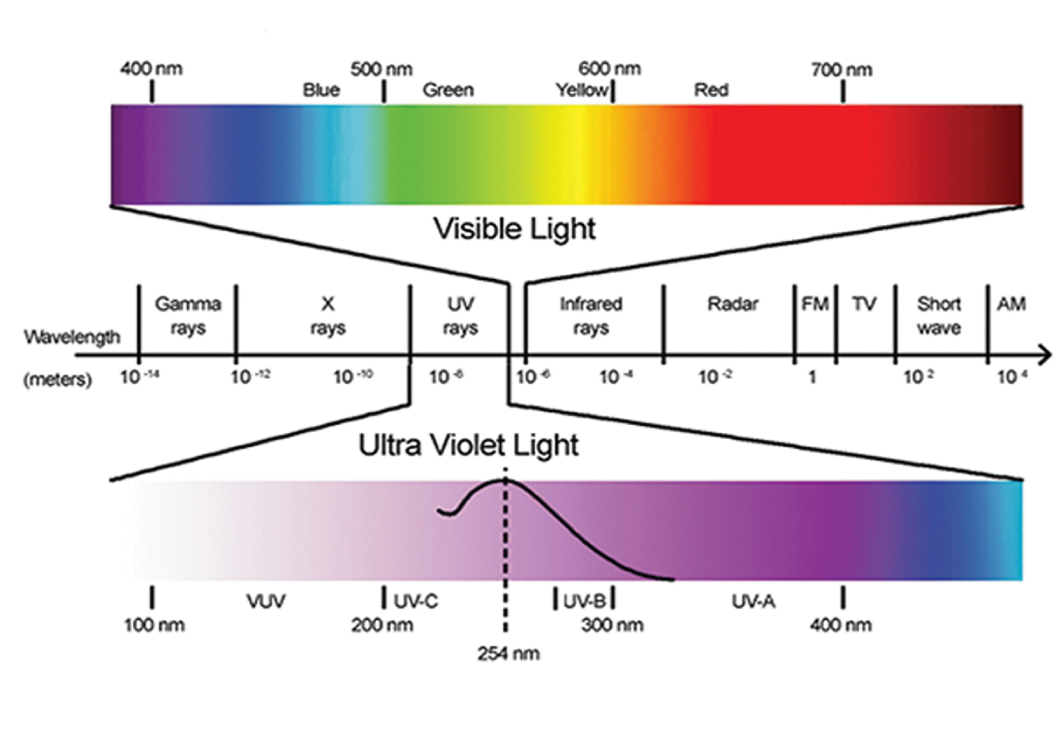 WARNING: You Should NEVER Buy A UV System Built With PVC

If you’re considering investing in a UV water purification system, there’s one important thing you need to know: PVC is a terrible material for building UV systems, for 2 reasons:

FIRST – It’s a well-known fact that PVC is destroyed by ultraviolet light. So any UV system built with PVC will slowly but steadily attack itself, and self-destruct.

SECOND – PVC has no reflective properties whatsoever, which means it has no way to combat the “pathogen shadowing” effect.

PATHOGEN SHADOWING – The Phenomenon That Makes Pathogens Harder To Kill

Bacteria, viruses, and most other dangerous pathogens have this annoying habit of “clumping together,” rather than floating around separately and independently.

We don’t want pathogens to survive through the vessel!

That’s why it’s absolutely imperative that every UV disinfection system has the ability to “reflect back” the UV rays, to kill the otherwise protected pathogens on the backside of the clump.

We believe ALL UV systems should be built to the standards of the Purity UVC system. (But sadly, they are not.)

Purity UVC is an ultraviolet pool sanitation system that will make your pool extremely safe and clean to swim in. The device works by producing ultraviolet light that destroys 99.9% of bacteria, viruses, and other pathogens in the water. This leaves you with clean and healthy water that is also gentle on your skin.

Reasons Homeowners LOVE the Purity UVC System for Their Pools

A Safer and More Enjoyable Swim

Proven Superiority in the Laboratory

Destroys Even the Toughest Pathogens

Safer and Better for the Environment

Would you like to know more about the swimming pool water disinfection system that exceeds all standards, and does what no other pool sanitization system can do?